Sponsored by the Center for Journalism Ethics, School of Journalism & Mass Communication, University of Wisconsin-Madison

Ethics for the New Investigative Newsroom

Bridging the Gaps: Holding True to Old-Media Values in a New Media World

Whatever Happened to Verification in Journalism?

When Journalists Join the Media Revolution: An International Conversation

Live video streams and a live blog are available on each session page. After each session concludes the comment forms will be opened. 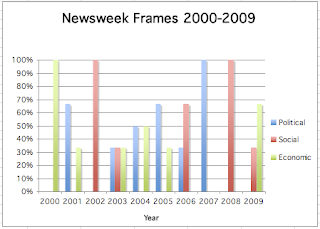 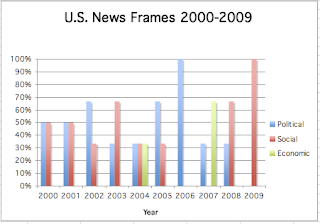 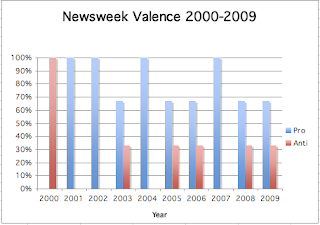 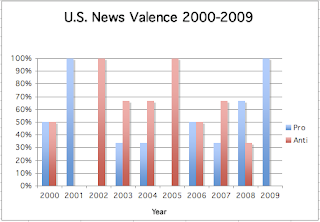 As a complement to my last post, I thought I would include the results of a recent content analysis on immigration. I conducted this analysis as part of a class on mass media and public opinion. I chose to compare Mexican immigration coverage in both Newsweek and U.S. News and World Report. I examined 25 articles for each publication, randomly selected from 2000-2009.

I studied both the frames and valence of each article. As for frames, I looked at whether the article presented the story within a political frame (emphasizing policy, political actors, etc), an economic frame (a cost-benefit analysis of reform or current immigration policy, mention of a financial component–need not include specific figures) or a social frame (impact on immigrant families or deported immigrants, the “human” side to the debate).

As for valence, I determined whether each article was pro- or anti-immigration. The pro-immigration articles used words like “legals,” “migrants” and “amnesty.” These articles emphasized Mexican immigrants as hard workers determined to find a better life. By contrast, “alien,” “illegals” and “deportation” signaled an anti-immigrant tone, as did mention of Mexican immigrants as “free riders” taking our jobs and draining our welfare programs. In the event that both pro- and anti-immigration words appeared in the same article, I determined valence by the more frequent of the two.

What did I expect to find? I wasn’t entirely sure what I’d find with the frames, but I was confident that Newsweek would be more pro- and U.S. News more anti-immigration. My hypothesis and rationale:

“I expect to find more socially framed, pro-immigration coverage in Newsweek, and more politically framed, anti-immigration coverage in U.S. News. According to Pew Research Center’s 2004 News Consumption Survey, Newsweek is seen as a more liberal news source, and many user-generated comment sites (Epinions.com, Answers.com) regard U.S. News as more conservative. Pairing these findings with Ansolabehere’s assertion that “Democrats are seen as…protecting the rights of minorities and the underprivileged,” while “Republicans are generally considered better able and more willing to maintain the nation’s national security” (1993), I hypothesize that Newsweek’s coverage will stress the humanity of Mexican immigration (social) and the need for amnesty and pro-immigration reform, while U.S. News will focus on anti-immigration as a means of national security.”

Why might this be? Well, the valence of each publication’s immigration coverage corresponds to its partisan bias. The lack of a landslide majority for any one frame reflects the diversity of newsmagazine content, which is frequently divided into politics, business, arts/culture and technology. The publications may also choose frames based on which would support their position on the issue, which may explain U.S. News’ lack of economic frames. If they thought the economic angle would lend support to the pro-immigration side, U.S. News’ editors may have scrapped that frame at the morning meeting.

My analysis stands as a warning to all your devout Newsweek and U.S. News readers: If you read one, read the other. You are not getting a full picture of the Mexican immigration issue from either of these magazines. Better yet, read and listen to a whole host of sources. Bias is alive and well, and if you want to make smart decisions, triangulate your news consumption.

The tech blog Gizmodo scored a huge story when it acquired what appears to be the next incarnation of the Apple iPhone. They paid an anonymous individual $5,000 for the device after he found it in a Redwood City, CA bar, apparently left there by an Apple engineer celebrating his 27th birthday. After finding the device the man says he contacted Apple via phone, but none of the people he spoke to seemed to believe him. It was then he decided to sell it to the highest bidder. After hearing this story Gizmodo decided to pay for the device.

Is this good journalism? Apple certainly considered the device stolen at this point, and when they found out where it was they quickly moved to get it back. According to an article at DailyFinance the finder never spoke to any employees of the bar, where the Apple employee “called constantly trying to retrieve [the phone]”. The finder also never contacted Police, nor just drove to down the road to Apple, 20 minutes from the bar, and dropped it off.

Is what Engadget did ethical? Nick Denton, CEO of Gawker Media the parent company of Gizmodo, doesn’t seem to want to comment. In an interview with CNET he left that up to the media ethicists.

As a non-journalist it looks to me like Gizmodo saw the ad revenue they would get from this scoop and disregarded what must have been some pretty big red flags. What do you think? Is this kind of “checkbook journalism”, especially considering the possibility of Gizmodo receiving stolen property, okay?

This week in my J201 class I’m talking to my students about broadcast journalism on local and cable television.  As part of my lecture preparation I always consult the superb “The State of the News Media” report put together annually by the Project for Excellence in Journalism.  Here’s what they have to say about local television news these days:

Stations, after years of declines in audience, may be nearing a point where they can no longer add new newscasts or new revenue opportunities, such as sponsored segments, to its old ones.Stations are banking on new technology, and indeed this is the one area where the numbers are moving in the right direction. As more people use the Web and mobile devices to browse video, stations stand to gain. Stations are expected to see brisk revenue growth from their online properties — websites and mobile — for years to come. But online only amounted to 8% of station revenues in 2009, and there is little prospect of it significantly buoying them anytime soon.

And TV stations weren’t the only media outlets seeking local revenue from Web and mobile devices, and some of their competitors are ahead of stations in getting into the game. Stations only had a 10% share of local online ad spending in 2009.

Amid all this, the simmering conflicts between local affiliates and the networks are intensifying. Networks are demanding a share of the fees that cable systems pay to local stations to carry their broadcasts, revenue the stations say they can ill afford to part with. In exchange, station owners could seek more influence over programming or more opportunities to sell local ads during network broadcasts.

The affiliates come to the bargaining table with a vivid illustration of their clout. NBC’s decision to cancel the Jay Leno Show was largely driven by the complaints of station managers.

(You can read the rest of the text here.)

(Here a “pure play” media site is one that works only through the Web.)

Would anyone like to weigh in with their views of the direction that local television news will take in the next ten years? 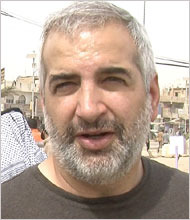